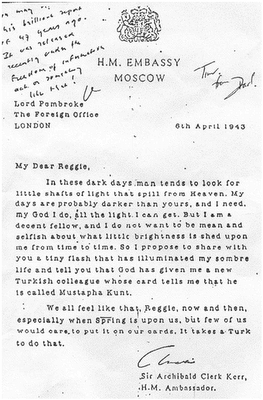 At the height of World War II on April 6th, 1943, British Ambassador to Moscow, Sir Archibald Clark Kerr, wrote the above letter to Foreign Office minister Lord Reginald Pembroke in an effort to brighten up his day. The letter was released by the Foreign Office under the 30-year rule and published in the Spectator, and on December 15th 1978, in the Far Eastern Economic Review.
I do wonder in this age of emails, texts and BBMs whether any such records will be left for the uncovering at a later date.

In these dark days man tends to look for little shafts of light that spill from Heaven. My days are probably darker than yours, and I need, my God I do, all the light I can get. But I am a decent fellow, and I do not want to be mean and selfish about what little brightness is shed upon me from time to time. So I propose to share with you a tiny flash that has illuminated my sombre life and tell you that God has given me a new Turkish colleague whose card tells me that he is called Mustapha Kunt.

We all feel like that, Reggie, now and then, especially when Spring is upon us, but few of us would care to put it on our cards. It takes a Turk to do that.

Posted by Charlie Farrow at 1:53 pm