The Lady Astronomer - a promising beginning 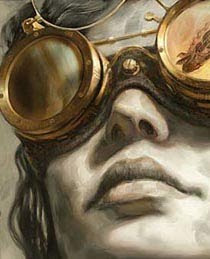 I am always interested to see work from new writers before it comes to market and have just had the opportunity to look at a sample chapter for a new book by emerging writer, Katy O'Dowd. This is her first fiction and looks to be an early foray into book publishing for Doctor Fantastique, publisher of a magazine of the same name dedicated to the 'steampunk' genre.

'Steampunk', as a term was coined as recently as 1987, but the characteristics of the genre are immediately recognisable in the works of Jules Verne, HG Wells and Mervyn Peake. Once coined it now seems bizarre that there is no antecedent for the label.

Science fiction which has a historical setting (esp. based on industrialized, nineteenth-century society) and characteristically features steam-powered, mechanized machinery rather than electronic technology; (also) such writing as a subgenre of science fiction.

Unusually, O'Dowd's sample chapter is currently for sale on Amazon rather than available as a free download - but this is surely a mistake by a new publisher that will be rectified very soon. 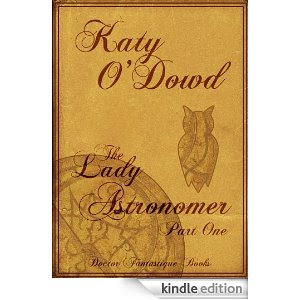 In The Lady Astronomer Chapter One, Katy O'Dowd gives us a tantalizing squint through the glass of her 'monoscope', letting us take a sneaky peek into her steampunk world. And the view from where I'm sitting looks pretty darn good.

The writer's narrative voice is particularly fine and if the dialogue comes across as weaker, it is worth considering whether this is apparent because of its proximity to such superb narration. The descriptive passages reverberate with the beautifully observed details of an imagined world, and these sections are bathed in a lyrical vocabulary that is evocative and innovative, yet accessible to a Young Adult audience. The characterizations of the human and animal protagonists are promising and look like providing sustained interest as the story unfolds; while the secondary characters appear to be stylishly sketched in order to offer comedic cameos.

If Katy O'Dowd's sustained storytelling throughout the full length novel is as good as her description in this sample chapter, then 'The Lady Astronomer' looks set to be a classic of YA culture in the making. My 'young adult' daughter and I are very much looking forward to the publication of the full text in 2012.
Exerpt:

Siphonaptera jumped on to the flat roof, hidden by his tiny size and darkness of the still night. Though the stars peppered the skies with diamond dust, their light would no more have illuminated the predator than using a candle to see from one end of a particularly dank, gloomy tunnel.

He paused on his long hind legs, lifted his head and fixed a beady eye on his prey. Three warm bodies for him to gorge on. If his front legs had been longer he would have rubbed them together in glee at the thought of the crimson blood that lay in wait for him within his unknowing quarry.

Blood. His tube-like mouth parts fairly quivered in anticipation. He jumped again and came ever closer. His tiny belly rumbled and he stopped, before realising that the noise was so minute nobody could possibly have heard it.

Victory would be his! Just one more jump, two, three, the excitement of wanting and knowing that it was within reach filled him in a great rush.

And then he knew no more.

Lucretia turned her head towards Leibniz, who had startled her. Her left eye, hugely magnified behind her monoscope fixed on the ring-tailed lemur.

“Leibniz, how many times have I asked you not to make noise when I’m at a critical juncture?” she sighed. “What do you have there, boy?”

The lemur sauntered over to her, arms behind his back.

“Show, Leibniz, show,” she demanded, raising herself from the roof and brushing down her dress.

Leibniz reluctantly held his arm forward and opened his paw to reveal the smudged smear that had once been Siphonaptera. Lucretia peered intently until she could make out what it was. She stepped back and grimaced.

Posted by Charlie Farrow at 2:40 pm