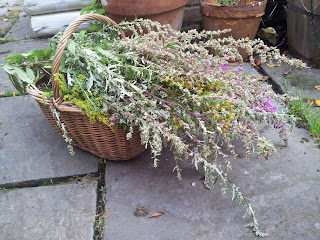 It dawned on me today (rather suddenly as these things do), that not only should I be publicising it (which I haven't), I should be gathering and preparing the materia medica for my talk on 'Herbal Fumigants' at the Springfield Sanctuary 'Celebrating Herbs Festival' in the Cotswolds on the weekend of the 7th to 9th September 2012.

Many people believe that burning herbs and smoking are something brought to us from the New World with tobacco, but tobacco is just one plant.  It's true that a huge amount of the herbal lore that is current in the UK today has been imported or reimported from America but burning herbs to release their properties has been Old World practice for as long as recorded history has existed, whether we are referencing the Oracle at Delphi or Bald's Leechbook which tells us in Anglo Saxon, "geréc þone man mid þám wyrtum". (Translation: smoke that man with herbs). And that's pretty much the nature of my talk.

So as my daughter didn't fancy Zumba this evening with me, I slipped out to gather some wild stuff, which to be fair is an activity considerably more to my taste on a hot summer's night than the Zumba which is neither new nor old world (but one must show willing), so I popped out specifically looking for certain herbs.

In particular, I was looking for Mugwort.  I thought I might find some in the first field along the tow path out of Newbury going west, a mere two hundred yards from my house. And sure enough, there it was in abundance. I have to assume that this land is the subject of some planning dispute because it is entirely fallow and uncultivated! Beautiful in my eyes but no doubt someone is looking to make a fortune from it but not by cultivating a bit of mugwort and a few butterflies. 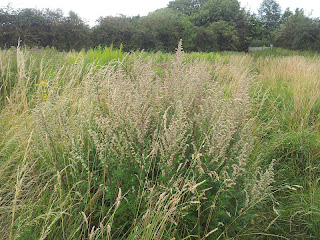 Mugwort, artemisia vulgaris named for the moon goddess, has been called the mother of herbs in many Old World cultures. It is the Mucgwyrt of the 10th century 'nine herbs charm', Bald's Leechbook refers to it as 'eldest of worts / Thou hast might for three / And against thirty". In 13th century Wales it was burnt as an insecticide by the Physicians  of Myddfai. The Chinese used burning mugwort to stimulate the acupuncture point. Some folks still smoke the leaves and dried blossoms to promote dreaming. And it's used as a smudge stick to clear negativity and stuck energy, to calm and protect, warm and dry.

There's loads more to be said about this one herb as a fumigant, so I had to get me some of that!

Anyway the talk is about a lot more than Mugwort. I'm addressing fumigants as medicinal, magico-religious & ceremonial, recreational, perfume, flavourings and preservatives, or toxins - so watch this space or come to the Festival!

My talk is called "Burning, fumigation and smudge: using smoke to clear the air" which is quite broad and as I've got far too much material for a little talk, I'm thinking maybe a little e-book supplement might not go amiss... Do let me know if you are interested in having some more information.

Posted by Charlie Farrow at 9:17 pm