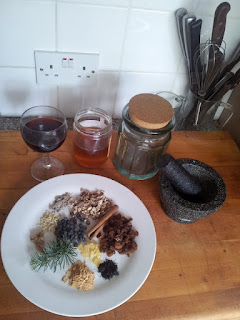 I've been preparing loads of stuff to burn to illustrate my talk on Herbal Fumigants at the Springfield Sanctuary Herb Festival this weekend, including Kyphi, the sacred and medicinal incense of the ancient Egyptians.

There are many recipes for Kyphi, some dating as far back as the inscriptions on Old Kingdom walls which date from around the second millennium BC, others that have come to us later by the records of the first and second century Greeks, like Diorscorides and Galen.

In preparation for my talk, I've made a version of Kyphi that is as historically accurate as I can.

Kyphi is an incense, made by combining many fragrant ingredients, characterised by the masceration of fruits which have been steeped in wine and then pounded together with dried ground resins, most notably frankincense and myrrh, and herbs, before being mixed with honey,  then manipulated into form and dried as pellets.

Gosh is it all that frankincense and myrrh, or is it the mulling of cassia and cinnamon in red wine? ... But by heck, it dun 'arf smell of Christmas! That's not just while mixing (during which it looked and smelled of Christmas pudding) but it's got a merry Christmassy smell when dried and burnt too, which speaks to me of mulled wine and happy holidays. And that surprised me because I had expected a more "bitter perfume":


"Myrrh is mine, its bitter perfume
Breathes of life of gathering gloom
Sorrowing, sighing, bleeding, dying
Sealed in the stone-cold tomb."

Obviously we'd love you to join us at the Festival, so more info, historical details or recipes won't follow until after the event!