As someone who believes that the current tripartite party system is incestuous, corrosive and corrupt, I find it very interesting in the run up to the 2014 European elections, that UKIP (whose xenophobic position is not mine, by the way) appears to be getting under the skin of the powers that be. Instead of being treated as genial buffoons on the fringes of politics, the mainstream media (in all its forms) is having a right ad hominem go at UKIP leader Nigel Farage.

A recent social media manifestation rather tickles me though. This image is being gleefully shared on Facebook:

I have pointed out to those of my friends who shared it that it is in fact nicely done Photoshop work  - Farage's face has been applied to this image: 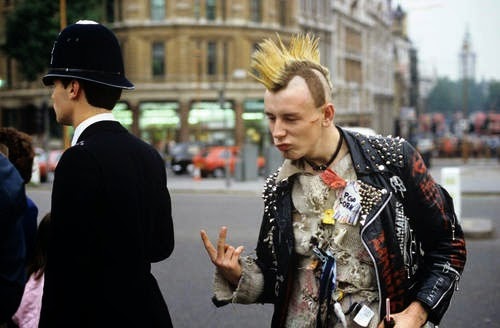 (However, if Farage had actually ever been a punk, I doubt that he'd have had a 50 year old face at the time...)

Anyway, I'm quite intrigued about who did the tidy Photoshop job and why. Given that punk was a uniquely British phenomenon characterised by a two-fingers-protest against the existing regime, wrapped in tartan and the Union Jack, what could this "fake" rebel image do for Farage? Certainly no harm at all!

So is it a clever viral campaign by UKIP or a memorable own goal by Conservative Central Office? Or just a random person messing about.

Answers on a ballot card!

Even Johnny Rotten is a mainstream Brit icon now:

Posted by Charlie Farrow at 7:24 pm