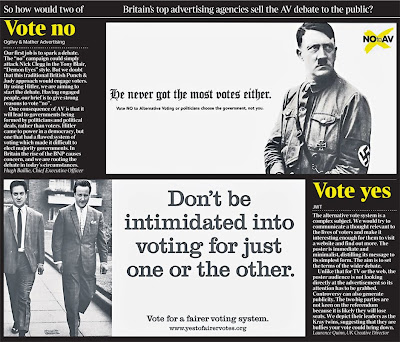 These two ads are really in today’s Times. Honestly! This is not some Year 10 pupil’s ‘comedy’ advertising for a Citizenship project.

It really is true that Ogilvy & Mather has served up Reductio ad Hitlerum! Big FAIL as the Nation invokes Godwin’s law for an ad that is devoid of any cogent (let alone original) thought.

And JWT too! They have got entirely the wrong analogy. Hello? It’s supposed to be Cameron and Cleggover who are the sharp-suited clones, not Dave and Gromit! And ironically pretty much the only good thing you could have said about the Krays was that they were snappy dressers in their day. Is this an implied compliment? Another Big FAIL!

Are our advertisers really so inept these days? What has become of the good political advertising of days gone by?

And what's with the use of LibDem yellow (by the subs at The Times) on the rationales for both offerings? FAIL.
Posted by Charlie Farrow at 9:09 pm