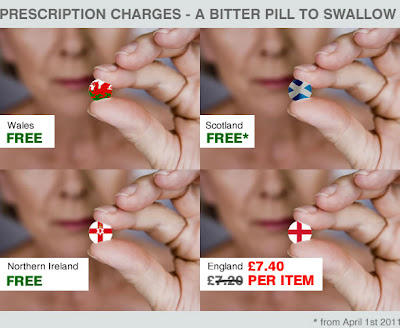 On Wednesday MSP voted to scrap NHS prescription charges in Scotland. Wales and Northern Ireland have already removed the charges.

Today "The Government" announced that the cost of prescriptions in England will rise by 20p to £7.40 per item from 1 April.

Scottish government health minister Shona Robison said lifting the charge would reduce the long-term cost to the health service and would no longer put people off going to see their doctor. However, this argument appears not to apply to English people who are expected to pay up or die young to reduce costs!

If the Scottish government is discussing the risk of people in England travelling across the border to claim free prescriptions, then we have got to stop pretending that there is not a problem.

The news today is that Wales has had another devolution referendum and they've now voted to be able to pass laws on devolved areas without involving the British government. That's great for the Welsh, even if the turnout was pitifully low.

So why does the "British Government" refuse to give us equal rights in this so-called “United” Kingdom? It's time for England to have a referendum on devolution. May is looking good...
Posted by Charlie Farrow at 3:16 pm