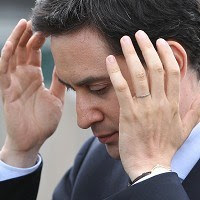 Some half-wit in the Labour party has today fondly imagined that it might be A Good Move to get poor old Gromit to declare that the party shall henceforth be the party of "grafters".

Clearly the posh intern who came up with this gem, imagined that he/she was employing a solid working class expression, which was same in sentiment, but groovily different from the hackneyed "hardworking families" phrase, tarnished by overuse in the Brown years.

While we all know that graft can mean hard work, with an etymology derived from the work involved in creating defensive earthworks, moats etc; hence the grafting tool which is a form of spade used by groundworkers to this day - and damned hard work wielding one of those is too by all accounts! But it is a shame these fools didn't have a little residual knowledge or failing that - check the dictionary:

The obtaining of profit or advantage by dishonest or shady means; the means by which such gains are made, esp. bribery, blackmail, or the abuse of a position of power or influence; the profits so obtained.

While it would be bad enough if it were only mere foreigners who understood the word to have negative connotations, unfortunately, it's not as though this usage is so American that it's unknown in this country.

A documentary about crack houses a couple of years ago, incensed my husband on many levels but no more so than when, the female announced she was off out "grafting".

Ironically her use of English was astonishingly precise and while immoral, it was not hypocritical. Better than Gromit! She was using the word quite correctly to mean that she was going out to rob, steal, con or otherwise obtain money by dishonest means, for her next hit.

Is there really no communications professional, speech-writer, or political advisor currently employed by the Labour Party, who has access to a dictionary? Or someone with more than a rudimentary grasp of the speech patterns of the lumpenproletariat?

Email ThisBlogThis!Share to TwitterShare to FacebookShare to Pinterest
Labels: Politics