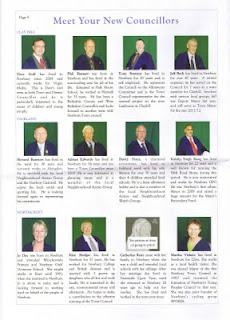 A rather glossy 6 page colour leaflet plopped on the mat this afternoon from Newbury Town Council. I find it rather distressing and depressing to be honest. I suspect the reason will become obvious when you pick THE ODD ONE OUT.

One of the ELECTED members for the ward that I stood for has not been sufficiently interested in the role in the two months since the election to be bothered to supply a telephone number or an email address or even a physical address where residents can communicate with her.

The address given for this woman in the leaflet is obviously false. We have no Saffron Road in this area and Saffron Close where this woman I believe does live, does not rejoice in the given post code.

The horror of it is that it's not just a deadline issue on the print - the Newbury Town website today had no contact details for her WHATSOEVER. Interesting that after our complaint the site has ALREADY been changed. (Just as well we have a screen shot..!)

David went round to challenge her at the address that is registered for her nomination with West Berks Electoral Services as a candidate tonight and she seemed keen to assure him that she was entirely on board and doing her duty. Yeah right! She would say that wouldn't she?

Now if she didn't really want to be a Town Councillor why didn't she just say so when the daft Lib Dem machine pressured her into it on the eve of the closing date for candidate nominations?

This is absolute corroborration of David's point that the parties just trump up some donkey in the right colour rosette to be voted at, but these people are the worst possible representatives because they don't want to be doing it.

So. Should we be calling for Catherine Kent to be (not impeached perhaps but) shall we say gently 'retired' and for another election to be held? And that costs money.

Or should the council co-opt a replacement member in the way that Ben Weatherill was co-opted without reference to the electorate after Gina Houghton passed away unexpectedley last year?

Or do we say 'well early days yet, I dare say Catherine Kent will buck up a bit once she gets her feet under the table'?

Answers on a postcard or almost any other communication channel please.

(To a real candidate in the Northcroft ward of Newbury who did not win but who did publish their real address, telephone number, email address, Twitter feed, Facebook Group and who did canvass streets with leaflets and was available to be spoken to on the doorstep in the ward).

Note to self - - look up how many r's and b's in corrobbborrratte?
Posted by Charlie Farrow at 9:41 pm