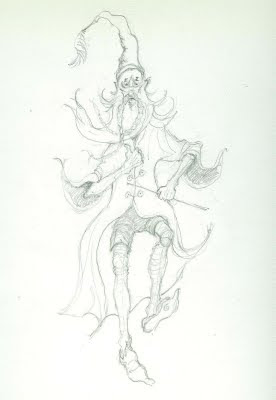 This is Plaucus, the Magician.

I've been working on developing characters for Walter Harris's 'Octave finds a voice'. Strange to be drawing again, but really nice.

"....standing on one leg in a clearing, scratching himself, tall and thin as a moonbeam, and wearing a long blue and silver cloak, yellow pointed shoes and a tall silver blue hat with a dark blue feather at its tip. He has a long silver beard with a blue point, and a silver wand in his hand.

Plaucus hops and down as though he were a bird himself. The feather in his hat and his beard seem to nod at each other, as if they were both parts of him" 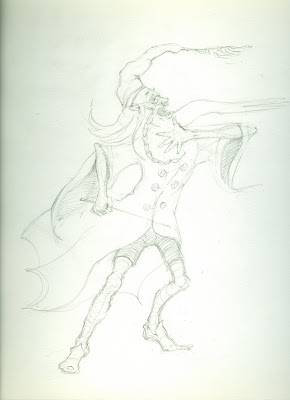 "Plaucus stood on tiptoe and bellowed the last word, his beard sticking out parallel to the ground. “There, what did you think of that? That was a tenor sort of voice. " "

Posted by Charlie Farrow at 6:14 pm

Email ThisBlogThis!Share to TwitterShare to FacebookShare to Pinterest
Labels: illustration, My Art