The Return of Fester - Microchipped cat


Our beloved cat, Fester, was returned to us last night 6th March 2012, after 9 months living rough at Vodafone HQ;  thanks to two lovely cat owning ladies, a microchip and Fester’s enormous paws!

Fester disappeared from home in Berkeley Road, Newbury on 11th June 2011. Our information about how he ended up several miles away in open countryside is still sketchy, as Fester hasn’t been up to giving a full interview yet. However, we believe that workmen doing a garden clearance over the road left their van open and while curiosity did not kill the cat, Fester was inadvertently catnapped. The workmen saw no cat and declined to tell Dave (Yates) where they had been tipping (which reluctance Dave puts down to the cost of semi-commercial disposal of garden waste. And while this is not the time to get political, Fester did feature in the 2010 General Election campaign as the Apolitical Demo-Cat who likes to be on top of his paperwork.)

In spite of a poster campaign, door knocking and searches of all the likely places (the dump) and unlikely places (everywhere else we could think of including wheelie bins), there was no sign of Fester. But we never gave up hope of his return and refused several offers of replacement long haired kittens, consoling ourselves with the thought that one day he might swagger back home, sporting tattoos, a pierced ear and a long story. While he hasn’t got those, he has been returned to us alive and well, but thin, dirty, dreadlocked, hungry and nervous.

His rescuers are cat-lovers, Philippa Bills and Cassandra Lund. Fester had been seen for some time looking sad, hungry and lost around grounds of the out-of-town Vodafone HQ, however it was only when this was drawn to Vodafone employee, Philippa’s attention that concerns were raised. As a Maine Coon owner, herself, she recognised by the enormous size of his paws and his sociable nature that this was not some feral stray but a Maine Coon with a home to go to.

She sprang into action. She gave him a little milk and some bacon to be going on with, and rushed off-site to fetch a cardboard box from Waitrose. She took him home with her, but anxious as to his condition she kept him separate from her own cats until she had a vet check him over.

Philippa and her neighbour Cassandra took Fester to Vets4Pets, Newbury where his condition was checked and his microchip scanned. One very emotional phone call later and we were reunited with our beloved Fester in the Vets4Pets surgery. We phoned our 15 year old daughter Rhianna Yates (who is Fester’s rightful owner, although he believes that he owns her) requiring her straight home from dance class without telling her why, for fear of her running under a bus in her excitement. The cat and his girl were soon reunited and in her own words Rhianna “cried like a baby”. 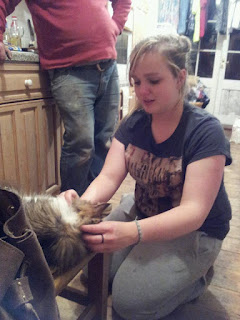 Grubby as he is, Fester is resuming his purr-poseful role authorizing all paperwork with his paw prints and being ‘that something’ that crashes on computers. 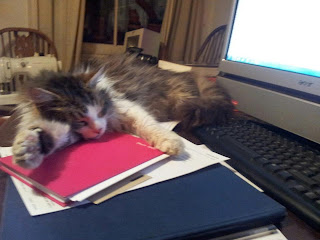 We’ve sent flowers to Fester’s lovely rescuers, Philippa Bills and Cassandra Lund, that they will get tomorrow with our very, very grateful love and thanks.

Sarah at Vets4Pets Newbury is very keen to point to Fester’s story as a way of encouraging pet owners to microchip,  so that  if they do, they may also have their treasured pet returned to them just like Fester.

I’ve posted some pictures with my thanks on the Vets4Pets Newbury Facebook page but because of the excitement his return caused last night on Facebook, Fester now has his own Fan Page that we are about to populate with pictures of the returning Cat King!