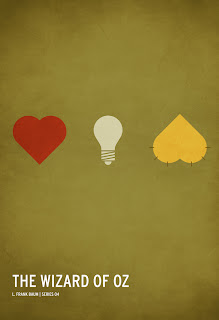 I was scrolling down this very pleasing series of minimally reworked classic fairytale posters by designer Christian Jackson, and thinking hmmmn these would make fabulous book covers... as you do... when my mouse wheel ground to a halt and my jaw dropped at the Wizard of Oz poster.

Now anyone who follows my husband Apolitical Dave's blog will know that Frank Baum's Wizard of Oz was always more than a children's book whatever old Frank made out, and it is often taught to students of economics as a powerful allegory for all that can go wrong with monetary policy. Even the BBC carries a discussion of the story's use as an economic parable.

But this pared down poster is clearly a Very Grown Up version. The Tin Man is shown as the heart he lacked; The Scarecrow described by a lightbulb representing the brain he lacked; and The Cowardly Lion? Well we all know what he lacked, and very fluffy liony ones they are too!