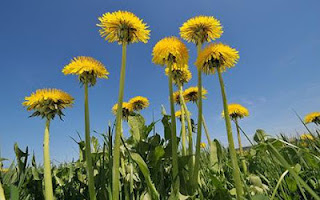 Lured down the primrose path of dandelionage by the Bank Holiday and the imminent rising full moon on Good Friday, my younger daughter Rhianna, foraging chum Suzie Bishop and I decided to go forth and forage. (Folklore tells us that the power of the plant is at its greatest on the waxing moon and diminishes as the moon wanes.) This is true for all plant gathering, but rather than rummaging for remedies, it's easier to forage with friends for blossoms to brew, particularly when they enjoy the bevvy better than the cure. So wine was our goal!

I'm quite a fan of the chap John Wright who features on River Cottage demonstrating foraged hedgerow yumminess.  Having tried his elderflower beer last year I looked up his dandelion wine. Unlike his elderflower stuff which needs nothing extra and which ferments in its own yeastiness, apparently dandelions don't do that. So in search of the requisite sachet of white wine yeast, in the glorious sunniness of Friday morning we foraged up to Barry Forkins' hardware store (independent trader and the last bastion of brewing stuff in Newbury) only to find him shut. Hey ho!

So we foraged down Bartholomew Street thinking that Wilkinson's might have the requisites, but while they were purveying airlocks and bungs, they had no yeast. Hey ho!

Undeterred, we figured that  a bread yeast would do the trick, but still needing sugar, lemons and raisins, we foraged intrepidly to little Tesco. Hoorah!

Bearing in mind that we needed both to gather and to steep, we then foraged onwards toward Poundland for buckets, trusting that we might pause for refreshment along the way at the Snooty Fox for a slush puppy or glass of cider. We were too early! Hey ho!

In Poundland, bucketage was procured! Hoorah!
And yet a Thirst Fell Upon Us!

So we foraged in to the Queen's Hotel where a most refreshing bottle of rosé, a glass of diet Coke and a bucket of chips gave sustenance. Hoorah!

We returned to HQ to deposit sugar, raisins etc and donned our foraging gear. 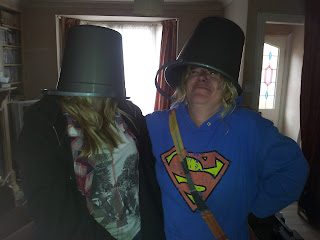 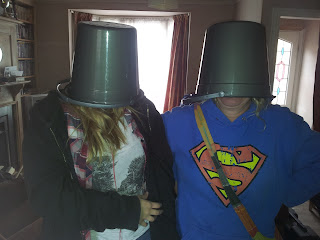 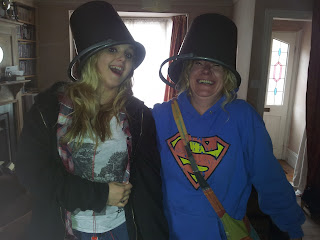 Wright may well believe that a gallon of dandelion blossoms can be gathered in 20 minutes, which may be true, but just because there several in my garden (or his) doesn't mean that there are many in the fields or hedgerows, that the rabbits hadn't had. 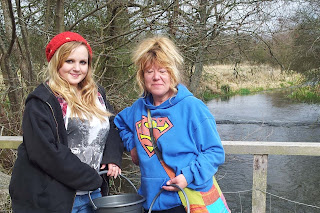 So we foraged away. 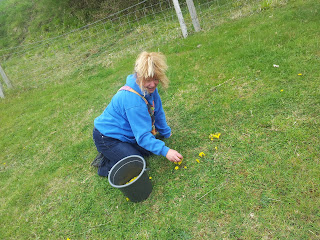 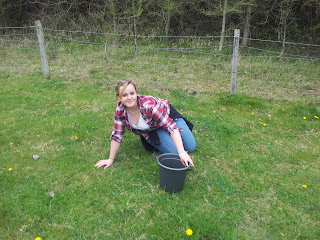 And back at HQ we separated the petals from the sepals which took AGES! But apparently this makes the brew less bitter. 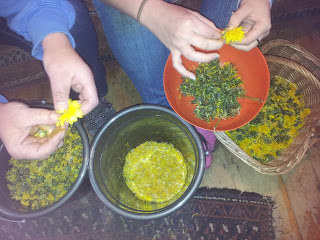 So we boiled the water and poured it over the petals, covered it with a clean tea towel and left it for a couple of days. 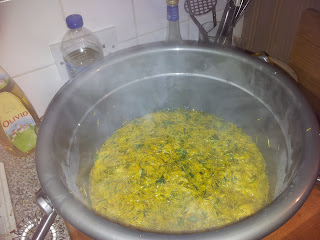 Then... we plopped it all into a large pan and boiled it up with the sugar and lemon zest. The recipe called for mushing the raisins by crushing and pounding...so I put some Tesco Value sultanas into the blender in batches to mush up (lazy) and added the lemon juice. Worked a treat.

When that cooled I sprinkled over the yeast and waited. For four days.

Today we strained the brew into a demijohn and it smelled really rather appetisingly of fresh bananas! 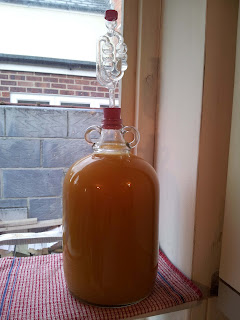 It looks like chicken soup right now but it's blooping away in its airlock so I imagine it will settle out the sediment and become deliciously potent...

The petals from enough complete dandelion flowers to loosely fill a gallon container4.5 litres of water1.5kg sugarZest and juice of 4 lemons500g raisins, chopped or squashed by putting in a carrier bag and pounding, or 200ml can of white grape juice concentrate1 sachet of white wine yeastYeast nutrient
Boil the water and pour over the petals. Cover and leave for a couple of days, stirring occasionally.
Pour everything into a large saucepan and add the lemon zest, bring to the boil then stir in the sugar until dissolved. Continue to boil for five minutes. Take off the heat and add the lemon juice and the crushed raisins or grape juice concentrate.
Clean the fermenting bucket thoroughly using a campden tablet, pour in the mix and cover until cool. Add the yeast and yeast nutrient and cover. Ferment for three or four days then transfer into a demijohn using a sterilised sieve and funnel. Fit a bubble trap and allow to ferment for a couple of months, rack-off into a fresh demijohn and leave until clear then bottle.
Posted by Charlie Farrow at 8:33 pm