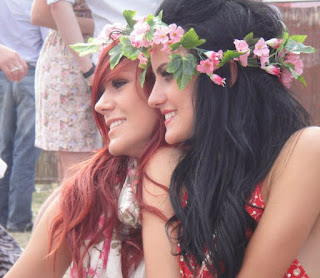 "Rise and put on your foliage, and be seen
To come forth, like the spring-time, fresh and green,
And sweet as Flora. Take no care
For jewels for your gown or hair:
Fear not; the leaves will strew
Gems in abundance upon you."

Robert Herrick, the 17th century English poet wrote the lines above in the poem Corinna's going a-Maying in 1648. It is the adjuration  of a young man to his girlfriend to follow the tradition of rising early on May morning to gather in the May foliage and to make love in the greenwood on the basis that one is only young once and he'd like to get his leg over ...

It's not hard to recognise the May poles which were dragged into villages, garlanded in flowers and erected for dancing around as phallic symbols, designed to celebrate the return of the fecundity of nature.

The practice of fertility rituals came to be frowned upon by evangelical protestants in the Reign of Elizabeth I, particularly since it was thought that most of the maids who went a-Maying would be maidens no more on their return! But by the time Herrick wrote 'Corinna', the more relaxed atmosphere of Restoration mores had softened the prevailing puritan disapproval of the May, but Herrick still feels compelled to avert impropriety by mentioning forthcoming marriage:


"And some have wept and woo'd, and plighted troth,
And chose their priest, ere we can cast off sloth".

But he's quite clear that by the point of anyone plighting their troth "many a green gown has [already] been given"!  Interestingly though, the records don't show an increase in the number of pregnancies from this season within or out of wedlock. Probably because the woods at the end of April then were as cold and damp they as they are today!


May Day is of course the early modern expression of the more ancient celtic festival of Beltane. It too was  traditionally celebrated at the beginning of May, marks the arrival of Summer and falls midway between the Spring Equinox (day and night of equal length) and the Summer Solstice (the longest day).

Beltane is just one of four Celtic quarter-days, or feasts, that mark the passing of the seasons through the year. The other days are: Lughnasa (August 1st), Samhain (November 1st) and Imbolc (February 1st).

Astronomically, Beltane occurs as the sun rises with the constellation of the Pleiades, also known as the Seven Sisters. The name of the month of May comes from the Greek word Maia, the name of the eldest of the Seven Sisters in their mythology.
The constellation of the Pleiades appears to have been important to our prehistoric ancestors. It is thought to be depicted in the Lascaux cave paintings in France dating from 16,500 years ago and to appear on the Nebra sky disk (found in Germany) dated 2,600 years old.

Throughout the British Isles, Beltane was a fire festival at which 'lucky' fires were lit and cattle driven between them on their way out to summer pasture (or sometimes over the embers). This rite was performed so that the cattle would be protected against diseases and from the menace of evil beings.

People also danced round the fires or leapt over them in the hope of being similarly blessed with good health and good fortune.

Posted by Charlie Farrow at 4:51 pm