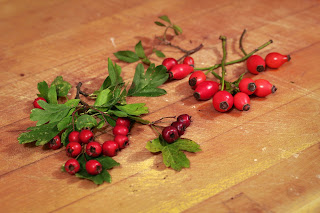 I slipped out in the glorious sunshine on a day back in mid-October to do a swift forage while the weather held. There is nothing lovelier than a beautiful, blowy sunny Autumn day in England's season of mists and mellow fruitfulness, spent harvesting the fruits of the hedgerow.

And bountiful such fruits are! Curiously the abundance available these days is the fruit of our lives of plenty. In wartime, the children would have stripped the hedgerows of the rosehips, hawthorn berries, and blackberries, before such as I came along with bucket and basket to browse for the last pickings that they couldn't have reached.

These days it seems very few people are interested enough in the magic, mystery and myth of the hedgerow to gather this bounty, but during the Second World War the collection of rosehips was organised on a national scale as a patriotic duty. The collection was organised by schools, voluntary groups and the Women's Institute. The scale of the crop during the war years was huge - some 2,000 tons - all gathered for syrup manufacture. Collectors were paid 3d a pound and the commercially produced syrup was rationed. 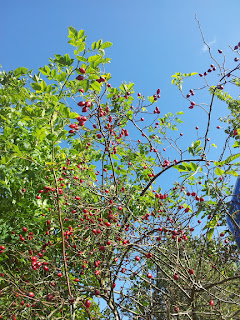 Rosehips are the fruit of the 'dog rose' or briar, and are one of the best sources of vitamin C, benefitting the immune and digestive systems, cooling the body and assisting elimination of wastes. Brilliant for colds and 'flu!

The syrup is absolutely delicious but is laborious to make because the juice and flesh must be extracted from the fine hairs surrounding the seed which are irritants. But if you've ever strained anything through a jellybag or muslin it's not rocket science.

Obviously the forager doesn't collect a specific amount, one just gathers what's there, or a bucketful or there abouts...

What you need to do is boil them up in water. So if you've got a bucketful of rosehips, then you need half a bucketful of water (and a very big pan!). Or scale your quantities according to how many of these gorgeous glossy beauties you have. One measure of water to 2 measures of rosehips - jug, pint or cup it doesn't matter.

Boil them in a pan with the lid on until they are mushy and tender then have a go at them with the potato masher. Then when the contents of your pan looks for all the world like spaghetti sauce (as above) strain it through muslin or a jelly bag.

If you want a really clear syrup, don't squeeze it through - let it drip like making a jelly. Or if you don't mind the pulp (which I don't) push it through the strainer with a spoon and squeeze.

Then stick it all back in a clean pan. Then for every two measures of strained gorgeousness add one measure of sugar. Boil for 10 mins, then pour into hot, sterilised bottles.

Take a teaspoon or two daily throughout the winter season or as needed to relieve colds and sore throats.

My elder son declared it to taste surprising, but pleasant - a sort of cross between ketchup and strawberries! Win!

Given that I had a surfeit of rosehips I made a rosehip vinegar too. Herbal vinegars are an interesting way of using the extracted herbal principle combined with the medicinal and culinary properties of a cider vinegar. The vinegars are delicious in salad dressings and sauces so one's recalcitrant offspring need not know they are being done good to!

The little jar in the picture above contains 30 rosehips,scored with a knife to help release the juices, then covered in a good cider vinegar and set on a sunny windowsill for six weeks to infuse. Then strained and bottled, it's equally useful in the kitchen or medicine cupboard.

A dessert spoonful in a little warm water, then swallowed, makes a great gargle for a sore throat
or
Taken with hot water and honey as a drink for colds.

You can make a wine out of rosehips or use the little hairy seeds as an itching powder.

As it happens the rosehips were an added bonus, discovered on my expedition to forage for hawthorn berries (more of which later), I wasn't looking for them - they kind of found me - which is the way of herbs...