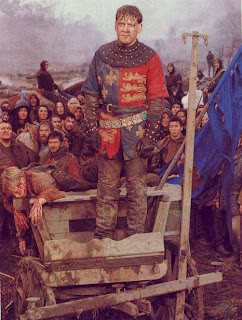 Today my dear (but habitually rude) friend set his Facebook status to read:

598 years ago today we gave the French a right shoeing at Agincourt. It was one of a series of bootings that we routinely gave the French back in the day. We should remember that next time that ponce Hollande gets uppity or some French farmer starts burning our sheep.

Leaving the French and the sheep aside, he is quite correct in memorising the date of the battle of Agincourt  as 25th October 1415, but he is not, in fact, right to state that it was 598 years ago today. Actually he’s missed the anniversary by nine days, due to the change from Julian to Gregorian calendar.

Why did dates change?

The ancient Egyptians adopted a 365-day calendar sometime between 4000 and 3000 B.C. The first major improvement to that 365-day calendar was made by Julius Caesar (100–44 B.C. ) in 46 B.C. With the help of Greek astronomer Sosigenes, Caesar developed a new calendar divided into 12 months of 30 and 31 days, with the exception of 28 days in February. This new Julian calendar (named after Caesar) built-in an extra day, or leap day, every fourth year to account for the 365.25-day solar year.

The Julian calendar, however, was still off by 11 minutes and 14 seconds each year. Over 300 years, this difference added up to just over 3 days. By the mid-1500s, the Julian calendar was 10 days ahead of Earth's natural yearly cycle. 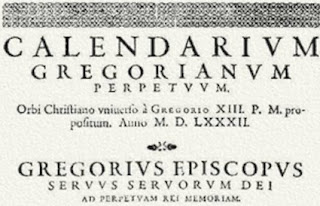 In 1582, Pope Gregory XIII installed a new calendar, designed to deal with this problem of solar years being slightly longer than 364 days for which reason festivities originally set by solar dates (namely the equinoxes and solstices) had drifted 10 days in the solar calendar. The Gregorian calendar shifted the entire year ten days forward in order to fix the discrepancy, so that ten days were “skipped”.

However, this being during the Reformation and the Pope being a Catholic, England didn’t play ball until 1752, leaving two different calendars in place in Europe for 170 years.

Historical-trivia geeks (such as myself) revel in the knowledge that Shakespeare and Cervantes both died on 23 April 1616 but Cervantes predeceased Shakespeare by 10 days! For dating these events Spain used the ‘New Style’ Gregorian calendar, but Britain used the ‘Old Style’ Julian calendar. Astronomers avoid this ambiguity by the use of the Julian day number.

By the time Great Britain, Ireland and the colonies changed over, the discrepancy between calendars had increased, so that Wednesday 2nd September 1752 was followed by Thursday 14th September 1752, 11 days later

This anomaly is of little importance to most people, but to writers of historical fiction it can be useful to realign dates with the seasons using what is called the ‘proleptic Gregorian calendar’. The following conversion ready-reckoner is a handy guide.

To perform a reverse calculation, add 10 correction days to calculate that 25th October of 2013 was the 4th November of 1605. 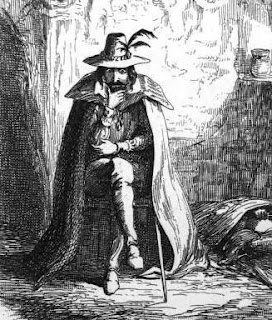 And what is the significance of 4th November 1605? It is the date of the initial search of the cellars of the Houses of Parliament that discovered Fawkes and the wood and coal that Percy had provided to cover the kegs of powder. A thorough search of the cellars by Sir Thomas Knyvett at midnight found the gunpowder.  Fawkes was arrested and taken before Cecil (Secretary of State) and King James in the early hours of 5th November 1605, the anniversary of which is tomorrow 26th October 2013.

So, while my friend is remembering an old victory over the French, he could today be commemorating an event that took place much closer to home.

Posted by Charlie Farrow at 2:18 pm

Email ThisBlogThis!Share to TwitterShare to FacebookShare to Pinterest
Labels: history