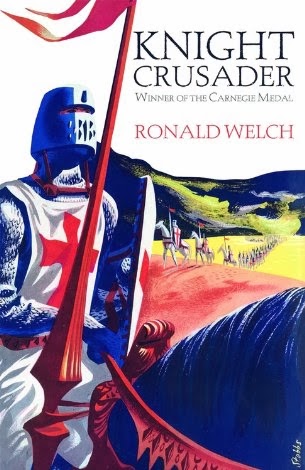 It's about time I caught up on this blog and published some of the recent book reviews I've done for the Historical Novels Review Children's and Young Adult list.

This one is for a re-issue of a classic, Knight Crusader.

Ronald Welch won the Carnegie prize in 1954 for Knight Crusader, an action packed tale of a young Norman nobleman from Outremer, Philip d’Aubigny.

The new edition retains the evocative original illustrations and cover art by William Stobbs. Unusually it also includes a Note on the Text for modern readers, rather euphemistically referring to ‘difficult’ language of a classic re-published in its original form. However, it is not that the vocabulary is incomprehensible to a strong reader of 8 to 12. It is rather that political correctness dictates that pejorative expressions like ‘half-breed’ are no longer used in new works for young people. However, Welch shows the newly arrived Norman barons as ugly, racist, barbarian thugs, whereas the protagonist, Philip, is a third generation ‘Syrian’ lord, who has assimilated elegant customs and practices of the East and is sophisticated and enlightened in comparison. Philip is a pretty darn heroic hero, yet even he holds some unsavoury opinions of the ‘Pullani’, or mixed race noblemen, as untrustworthy schemers.

The plot claps along at a splendidly brisk pace, informed by the author’s superb knowledge of place and period. The fight and battle scenes in particular are vivid and powerful. The reader is immersed in the action, complete with sights, smells and sounds and one is left with a genuine belief that the author has both gone to war and to the Holy Land.

A stylistic point unusual to modern ears, though, is the occasionally didactic narrative voice. Equally unusual is the unnervingly unexpected savagery of the protagonist in the denouement which is so convincingly shocking as to leave the reader (this reader anyway) ‘blown away’ by a masterpiece. Wow!

Knight Crusader is not a ‘girly’ book yet this female reviewer loved it; but if you want your son to fall in love with history and reading, this may be the book to do it.
Posted by Charlie Farrow at 5:44 pm