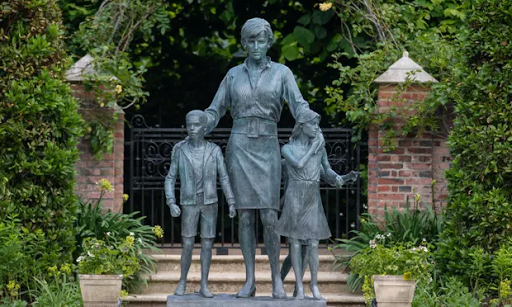 So there has been an erection of a statue to the sainted Diana.

Her stiff likeness has been raised in iconographic superiority over a couple of random ethnically diverse little people who have been represented as small adults in the same way that Empress Victoria was elevated above the teeny tiny subjects of her Colonial Realms.  Ian Rank-Broadley has not depicted these little people as children—their tiny heads render them as little adults—but of lesser status in the same way that we see in the hierarchies in most religious iconography.

OK it's not very good but, why was the hideous message of the icon size superiority not picked up at the maquette stage? Surely, this has got to be an appalling choice by the powers that be?

Over and above that, can we all agree that statues have not really been 'the thing' since General Lee and old Colston got themselves toppled?

So, why have the Brothers pursued this ghastly course at all?

Posted by Charlie Farrow at 9:38 pm