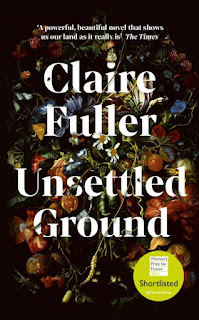 I’ve just binge listened to the audiobook of Unsettled Ground  by Claire Fuller. I’ve had it on my TBR list since my favourite local bookseller, Emma at Hungerford Bookshop featured it as a local story from a local author. Sadly I didn’t manage attend the ‘do’ – (but can I say the events at Hungerford are fab).

Unsettled Ground is set just down the road from here and references Newbury, Hungerford etc. but while is a story of tight localism, squirming into an almost 19th century Hardyesque village setting that is suffocating,  yet open air and wide, it’s a rural story that could have been played out in an urban tower block. It is a story that is a slow burn – that is literally the point - but oh so compelling. There is no ‘twist, it unfolds with a relentless grind. The outcome is satisfying because it needed to be acknowledged, not because it was surprising.

The weaving of folksongs and music into the fabric of the text is something that I have a particular interest in. There was no music included in the audio, but the verbal delivery of the lyrics (as one would read from the printed page) was well done.

I say I’ve listened rather than read it, which is unusual for me. While I enjoy audiobooks, mostly I find the narration to be intrusive to my interpretation, so that I flick back to the written word and ‘co-read’ in order to progress. But this narrator, Rachel Bavidge, is splendidly self-effacing. She uses accents sparingly and judiciously, even if she slides occasionally from Berkshire / Wiltshire into a sort of Irish-ish, it didn’t spoil it for me. As I say, I binge listened to the whole thing today (and I don’t like to speed up into Pinky and Perky territory), and I was captivated, saddened, and then raised up again.

I liked this book – a lot. I recommend it as a full-on 5 star. I give the narrator 5 stars too.