I can't believe the election literature the parties are putting out for the this tiny little ward by-election for Newbury Town Council tomorrow. It is a glorified parish council FFS!

We've seen rather gross "dog whistle politics" in a  town council election leaflet. Immigration? How wrong is that? Purleese! 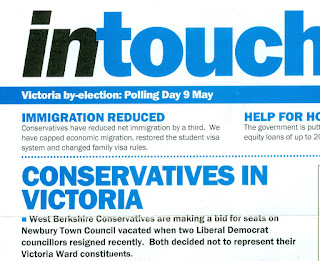 They're trying to tell us that it's the river that will flood us but we know that it's the blocked drains 'wot dun it' last time in 2007 and they haven't been cleared since. I have a FOI request in, but hey. 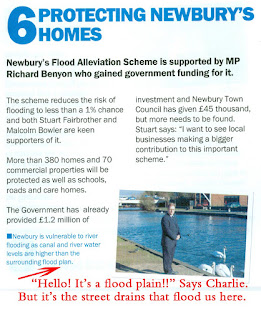 It is entirely testament to the point that we are making about the parties failing the people. I certainly don't mean to have a go at the Tories at the expense of the Lib Dems. The Lib Dems are the ones who've been presiding over the Town Council's fiasco - they've had control!

There are 23 seats on the Town Council. It was 12 Lib Dems to 11 Tories, until two Lib Dems couldn't be arsed anymore and caused this election, the Lib Dems had control. Now they're all fighting over it.

The irony is that if you vote for me and Dave Yates, you have a unique opportunity here tomorrow to make a real difference. If we are elected neither of these parties will hold sway unopposed. We can hold them to account on every vote.

Please don't give your vote to any of these numpties! Vote for me and Dave!
Posted by Charlie Farrow at 9:56 pm