I am married to Dave Yates, have lived in Newbury for twenty five years and raised four children here. The two elder ones have good degrees and jobs, the third is still at Newbury College and the youngest at St Barts.

I’ve been a Marketing Manager in a school and a university and for some of the biggest brands. I’ve been a Governor of Park House and for several years I’ve been an active volunteer member of the Sustainable Newbury Group on Newbury Town Council.

I was asked by a group of young mums to help them campaign to get the fence put back round the toddler play area in Victoria Park. But we were refused - all 1500 of us!

I was among the first cohort of Chartered Marketers in the UK and if I can’t get the market thriving again, then nobody can.

I have a love of the history of Newbury and I’m concerned that its heritage is being squandered with the ever greater needs of 'vanity projects.

'Apolitical' describes a convention of impartiality amongst people active in politics, like the Speaker of the Commons, the Cross-Benchers in the Lords or most parish councillors, who are not subject to the party 'whip' or told what to think by a political party.

Being Apolitical doesn't mean apathy or lack of interest in democracy or local affairs.

We believe we should be guided by our electors' wishes, considered evidence, our real world experience and expertise, and our consciences.

We don’t believe any of the main parties has OUR best interests at heart.

I joined the army age 16 and my role as a Military Surveyor brought me to the School of Military Survey at Hermitage in the early 1980's. I have been in Newbury ever since, first in York Road, and then Berkeley Road where I have lived for over twenty five years. A surveyor by profession and a builder by choice, I am a detail man with an eye for numbers.

I worked for many years in the piling industry, and have been involved on many
projects which utilised de-watering systems, similar to that used by Costains, in the construction of the Parkway Development. I, like many others, believe that the damage done to Victoria Park and the buildings around, is entirely the fault of Costains.

If Charlie and I are elected to the Town Council, I will not consider myself to be bound by the gagging order placed on the Lib-Dems and Conservatives by their masters at West Berkshire Council. I will make known the details of the report commissioned by the Town Council, which has been paid for by you. 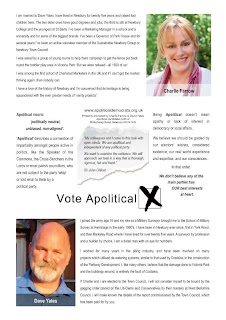 Posted by Charlie Farrow at 5:35 pm