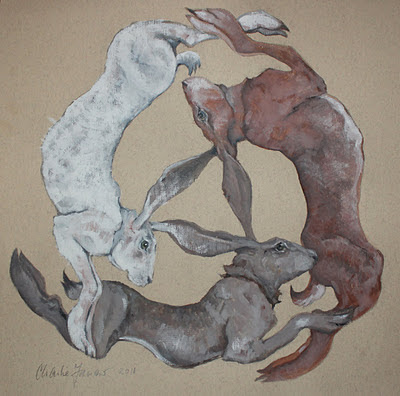 Magick 4 Terri is a heart warming and magical fundraising initiative organised by the friends and colleagues of editor, artist, and writer Terri Windling in her time of need. Her Journal of the Mythic Arts is the best reference on the net for all things mythical. She is recognised by many as the faery godmother of fantasy literature and mythic arts, and as such many amazing people in the field have donated work that can be bid for. There is signed artwork, signed books and all sorts of other things by people like Brian and Wendy Froud, Neil Gaiman, Alan Lee and err ... me.

I adore Terri's work and when I heard about this appeal I wanted to do something unique for her, that captured her spirit.

Terri wrote a fantastic article on the Symbolism of Rabbits and Hares and in her honour I have created this piece especially for this auction. It is an original painting 360mm x 365mm in gouache on Ingres paper.

The Triple Hares (sometimes called Tinner's Hares) is an ancient symbol of three hares or rabbits running in a circle and joined by their ears which form a triangle at the centre of the design. The symbol is a puzzle for each creature appears to have two ears yet, between them, they share only three ears.

The motif is an extraordinary and ancient archetype, stretching across diverse religions and cultures, many centuries and many thousands of miles. It is part of the shared medieval heritage of Europe and Asia (Buddhism, Islam, Christianity and Judaism) yet still inspires creative work among contemporary artists.

Like the Green Man it appears often on medieval church bosses and that kind of thing. But no-one knows quite what it means...

You can bid for my red, white and 'blue' hares here until 15th December, but if you're not in the market to buy, I'd be grateful for any re-tweets and re-bloggings of this post.

The campaign can be followed on Twitter and Facebook. I'm to be found @charliefarrow1 on Twitter please do add me.
Posted by Charlie Farrow at 7:23 pm

Email ThisBlogThis!Share to TwitterShare to FacebookShare to Pinterest
Labels: My Art