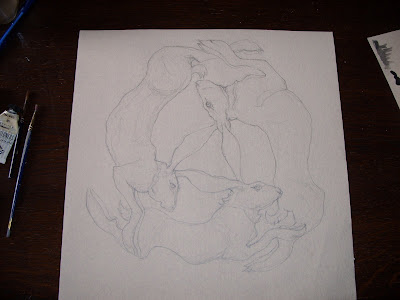 I've embarked on a painting of the Triple Hares - well it will be a painting - it's obviously a sketch at the moment. I'll explain what the painting is for when I've finished it.


The Triple Hares (sometimes called Tinner's Hares) is an ancient symbol of three hares or rabbits running in a circle and joined by their ears which form a triangle at the centre of the design. The symbol is a puzzle for each creature appears to have two ears yet, between them, they share only three ears.

The motif is an extraordinary and ancient archetype, stretching across diverse religions and cultures, many centuries and many thousands of miles. It is part of the shared medieval heritage of Europe and Asia (Buddhism, Islam, Christianity and Judaism) yet still inspires creative work among contemporary artists.
Like the Green Man appers often on medieval church bosses and the that kind of thing. But no-one knows quite what it means...

There's a fantastic article about the subject covering the symbolism of rabbits and hares by Terri Windling at Endicott Studio.
Posted by Charlie Farrow at 2:43 pm

Email ThisBlogThis!Share to TwitterShare to FacebookShare to Pinterest
Labels: My Art